Social media sites like Twitter and Instagram have become a great network not only for businesses for brand building, but also for celebrities for self-promotion or rather personal branding. Successful celebs are well-versed with the art of using social media networking to build their brands.

The right example of a hot celebrity who uses social media aptly for self-promotion would be Lady Gaga. She tweets riddles, teasers, and hints about her forthcoming albums, videos and tours and keep her fans interestingly making guesses from the edges of their seats. And the result is that she is a great star with all her concert tickets getting sold out instantly. Similarly, there are many other ways in which celebs use social media for self-promotion and here’s a peek into it. It’s common these days to see celebrity stars leaking behind-the-scenes footages on their Facebook fan page – an exclusive opportunity only for their FB fans. This urges more people to like them on the social media site and hence the stars win more fans and also a lot of publicity. Many celebs gain fans and followers quickly on Twitter and Facebook when they share information about their personal lives. Fans love to stay updated about their favourite star’s lives. Many celebrities share this information so smartly that fans don’t even get to realize that it’s a part of their advertising campaign.

Fans always show great interest in learning about the upcoming projects of their favourite stars. Celebrities understand this very well and share frequent updates about their latest projects, thus instigating an interest in their followers. Doesn’t that sound to be a great idea for promoting?

Promote Their Own Interests 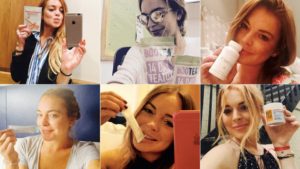 There are many celebrities, who often have several other outside interests as well – they use social media to promote this interest. For instance, the Kardashians, in addition to hosting the reality show, own a clothing store, which they exhibit on Facebook, Instagram and Twitter.

Though this might not be a self-promotion social media marketing strategy, it still promotes the cause they support and in turn fetches them popularity. It’s great for spreading the work about the charity.

Social media is certainly a great platform for the celebs to reach out to their fans and get them involved.